The history of mapping in and around Scotland is quite interesting and I hope to track down the earliest mention of Corryvreckan either on a map or in accompanying texts. So far we have the 1654 Blaeu map with the Corry spelt Koribriken.

The earliest known map of Britain which has any degree of accuracy is dated around 1360 and known as the ‘Gough Map’. This resides in the Bodleian Library, Oxford and is two skins of vellum just under 4ft x 2ft. It is remarkably accurate around England and Wales but Scotland looks like somone’s thumb!

Richard Gough first published an account of this map in 1780 and it is thought that it was prepared for Edward I. Many of the place names in Scotland suggest it was either in preparation for, or as a result of, his excursions into Scotland.

The oldest chart showing the whole of Scotland was produced by the Catalans of Majorca in 1325. The first one to have any accurate shape to Scotland was transcribed by Battista Agnese, a Venetian, between 1536-1564. In 1583 a chart or map was engraved and published in Paris by Nicolas d’Arfeville. The information for this was, however, collected much earlier and the publication was accompanied by a ‘Rutter’ which was the common term for today’s Pilot.

Nicolas had come across the rutter written in the Scottish language of the day and had it translated into French and acknowledging a man called Alexander Lyndsay, ‘excellent Scottish Pilot’ who was with King James Vth on his voyage round his kingdom. Extract referring to the Gulf:

‘Betuixt Scarba and Dura is the most dangerous stream knowing in all Europe, for manie of the seas whiche flowethe betuixt the Mulle of Cantyir and Yla passeth throwe this narrow channell and in the passyng they fall with such a great violence upon the cost of Scarba that they retourne to the cost of Dura with a great noys, making in thair returning a depe horlepoole quhairin if schippis do enter thair is no refuge but death onlie. Nothwithstanding the best tyme that may be had of it is the tyme of full sea and low water. This passage is callit Corrbreykin’

It was James IV who was the naval king. His flagship the Great Michael had a crew of 300 and in 1513 an Alexander Lyndsay was listed among them. In the years 1493-98 James IV made four excursions around the west coast Scotland. Ships were built on the Forth and Clyde and in the Hebrides with the timber for their construction coming by sea. As one can imagine the need for charts and navigational information must have been a priority with the tidal difficulties and reef strewn coasts and sealochs. Little else is known about Alexander Lyndsay.

The Bleau map of 1654 was the result of the labours of another Scotsman, Timothy Pont. He was the son of the Rev Robert Pont [1524-1606] minister at the church of St Cuthbert’s in Edinburgh. Young Timothy attended St Andrews University and graduated in 1583 and began surveying soon after. Around 1600/1601 he was appointed minister at Dunnet church in Caithness. He tried to have his findings and surveys published but was evidently thwarted and he died prematurely.

His heirs failed to keep his records properly and these were in danger of being lost through neglect when Sir James Balfour of Denmiln [a very faint relation to the writer whose middle names are James Balfour!] purchased them. However it was another man – Sir John Scot – who was in communication with Joannis Blaeu over another publishing matter who brought the latter’s attention to the Pont works and later publication. One might wonder why it was a Dutch engraver who should be so keen to publish accurate maps and charts of the west of Scotland. The Dutch were great seamen and traders. The seas of west of Scotland were alive with fish to be exploited.

It was the humiliation of the English [Hanoverian] navy that spurred the next great step forward in charting the west of Scotland a memo to the Lords Commissioners of the Admiralty around 1730 gives a flavour of current thinking:

‘The total ignorance which all people are under of those tides and currents, and of the bearing of the isles and promontories, they being all erroneously left out in every map or chart that hitherto have been published …
… Should there be occasion to send any of His Majesty’s ships-of-war into these parts to suppress any future insurrection amongst the Highlands or to prevent any foreign invasion, as there was in the reign of King William and in the beginning of the reign of His late Majesty, single ships or squadrons might proceed with safety which could not formerly nor cannot at present be done …’

Prescient comment. Not long after this Bonnie Prince Charlie led the Navy a merry dance after landing on Eriskay off the French privateer Le du Teillay. For five months over 20 ships led by the 58 gun battleships Lyon and Exeter with smaller vessels that could manoevre in confined waters searched for the Young Pretender. French vessels slipped in and out to try and rescue him again. They had the advantage of local pilots. The need of the Admiralty became abundantly clear.

From 1748-1757 Murdoch Mackenzie, Hydrographer to the Admiralty was tasked with a systematic survey of the entire coast. Mackenzie was an Orcadian, a brilliant mathematician, an energetic and practical man who understood the needs of seafarers. Today his results may appear crude but in his time the improvements were dramatic [a fuller story of Mackenzie’s work to follow]:

Mackenzie started work in the Hebrides and using a system of triangulation initially set up on a beach using chain and compass he created a base point to the nearest peaks which was absolutely accurate and from where all measurements followed, bearing in mind that he still had no means of measuring Longitude apart from the standard method of the day … observing the eclipses of Jupiter’s moons which gave him local time and comparing it to GMT.

He took his inshore soundings and measurement from a six oared vessel carried with them – imagine:

‘Corryvreckan is a violent breaking sea, and whirlpool, formed between the Islands of Jura and Scarba, which will wash over any ship’s deck, and be apt to sink her if the hatches are open … The stream is so excessively rapid, and the sea swells and breaks so violently, even in the calmest weather, that it is impossible to measure the greatest celerity of the stream; but it does not seem to be less than twelve or fourteen miles an hour … The counter stream seemed to run about five or six miles an hour; for a boat with six oars, in a calm day, could not stem it … To manage a vessel over Corryvreckan … the most prudent way seems to be, to secure the hatches, and everything that is loose on deck, and to endeavour, by sails and helm, to steer the vessel right through the middle of the Sound so as the tide may carry her between the most violent breakers, which lie on each side.’

His results were published by the Admiralty from 1753 onwards and in 1795 a Hydrographic Office was established and about 1823 charts became available to any purchaser. [See the 1854 image]. 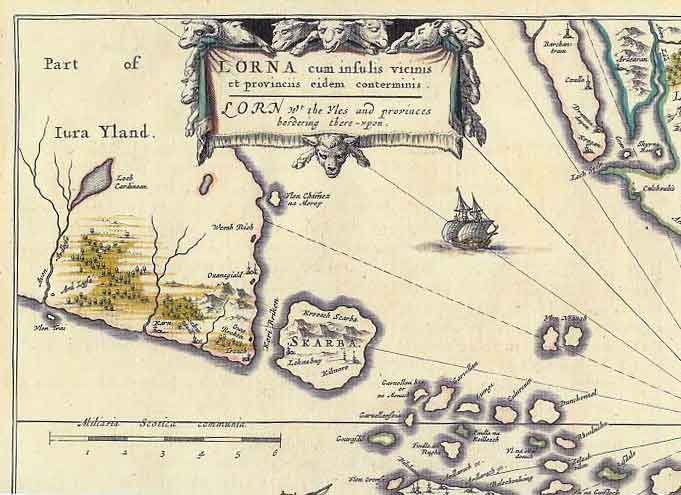 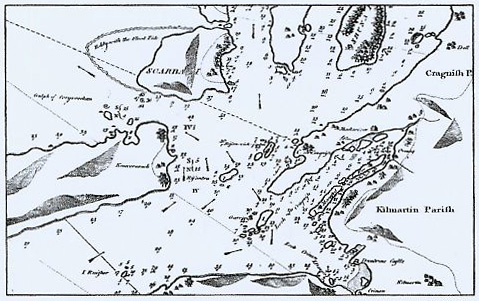 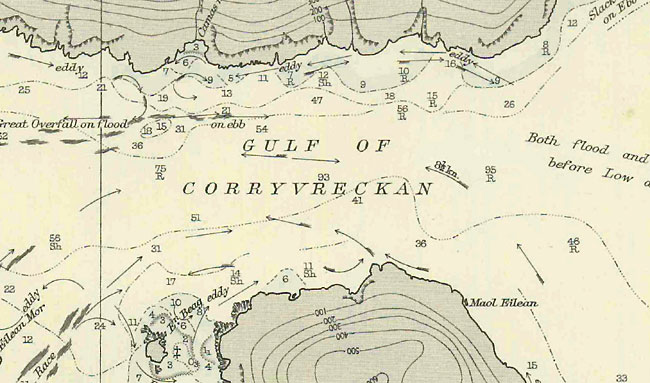 Segment From The 1854 Admiralty Survey