(Kind permission granted by Kate Muir, the author of this article & The Times Newspaper) 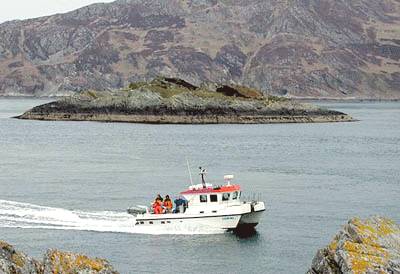 We’re heading into the Corryvreckan whirlpool, described in the sailing handbooks as ‘One of the most notorious stretches of water anywhere around the British Isles’. It’s the spring tide, time of the strongest turbulence, but there isn’t a wind, which is fortunate, because we’ve got a three year old at the helm. ‘I’m in charge’, she says cheerfully, and I admit to a tense moment until I notice a giant rubber band thing, which I presume is the autopilot.

My knowledge of boats is limited to the ones you rent for two quid in the park, but even I am a little surprised when Mike Murray, our captain, turns off the engine. There’s a funny grinding sound and we’re sucked at a steady 7 knots towards the gurgling mouth of the beast. In the distance, a long white wave emerges, and sits waiting.

We are awfully near the sharp salami-slices of rock at the north of Jura, but then again we’re not far away from some vicious meringue points by Scarba, the island at the other side of the whirlpool. I feel we’re close to being toast ourselves, especially when the boat starts turning in circles. 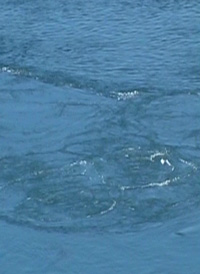 Everyone else is very nonchalant – we’re not going down the plughole, it’s just Mike from Gemini Cruises demonstrating the power of the current. I’m terrified. I think if I knew port from starboard, or owned one of those proper sailing jackets with a logo, instead of an anorak someone left at our house here once, I’d feel much more confident. I casually slip over to sit on the box of lifejackets, just in case.

I stuff the three-year-old inside my anorak. ‘It’s not one whirlpool as such,’ says Mike. ‘It’s a whole series of powerful vortices, and you never know where they’ll appear. You can never be entirely sure how the Corryvreckan will be behaving before you get there.’

As Martin Martin wrote 300 years ago of the Corryvreckan, when it was much in the habit of sucking sailors to their deaths: ‘It yields an impetuous current, not to be matched anywhere… the sea begins to boil and ferment with the tide of the flood, and resembles the boiling of a pot; and then increases gradually, until it appears in many whirlpools, which form themselves in sort of pyramids, and immediately after spout up as high as the mast of a little vessel, and at the same time make a loud report.’ It’s an ideal holiday destination then, for small children.

That’s what George Orwell thought anyway. There he was in a cottage on Jura in 1947, trying to finish his master plan for a 21st century telly series called Big Brother when his whole family rolled up, nephews, nieces, the lot.

‘Uncle Eric’, as he was known at home, took the kids – Ricky, Henry and Lucy – on his little boat. Like us, he felt the Corryvreckan would be of some amusement. But as Orwell’s biographer noted, ‘his bravery, stoicism and eccentricity came across, but also his lack of common prudence… to take children in an open boat across such a famous tidal race, without being sure of the tides, could appear almost crazily irresponsible’.

Unlike Mike, who consulted his little yellow tide book before we set out, Orwell went into one of the minor whirlpools and lost control. As Henry explained afterwards: ‘The boat went all over the place, pitching and tossing so much that the outboard jerked from its fixing.’ Young Henry was left to row themselves towards a rock island, since Orwell wasn’t as strong. As they reached the rock Henry jumped out, but the boat flipped over, trapping Ricky, the three year old, underneath.

Orwell swam calmly to pull Ricky out, then sat on the rock, and put his cigarette lighter out to dry. Minutes later, he announced he was off to find food, which was odd, since they’d just had breakfast. As Henry noted: ‘When he came back, the first thing he said was, ‘Puffins are curious birds, they live in burrows. I saw some baby seagulls, but I haven’t the heart to kill them.’ He concluded, ‘I thought we were goners.’ He almost seemed to enjoy it.’

Of course, that’s the point, though we’re trying to keep our thrillseekers dry. My stomach’s rocking and spinning, and so’s the boat. ‘Look for the flat green areas, and the bubbles coming up from beneath,’ says Mike. The kids love it, the stories, the legends, the rollercoaster. They’re not scared.

But then, they’re not in the position, like us adults, of knowing too much. They did not sit drunkenly the night before through the 1945 black and white film called
I Know Where I’m Going, starring Wendy Hiller and Roger Livesey, which climaxes in oilskins and near-death in the whirlpool. This was my third viewing of the camp classic, which features Hiller as a sharp witted girl who intends to marry for money, Livesey as a penniless young naval officer who turns out to be a Scottish lord, and the Corryvreckan as its blood-sucking self.

Back on our boat, there’s a horrible sensation of going backwards and forwards at once. For those of us cowering behind the cabin [me], there’s the huge waves chasing us, until suddenly Mike revs the engine at full throttle and hauls us out of hell. He does this a couple of times a week, I’m sure. It’s his job.